I’ve always had a vague, background interest in writing and writing implements. As a child, I had a couple of “teach yourself calligraphy” books, a few calligraphy pens, and I enjoyed finding excuses to use them: writing up the menu for tonight’s dinner, a sign for my bedroom door, etc. But then computers happened and I started writing by hand a lot less, and when I did, it was with whatever cheap biro happened to be close by.

Fast forward a few years (too many than I’d like to count), and in 2020 I joined the Relay FM members Discord. This was a place where people who enjoyed the variety of podcasts that Relay FM offered could socialise and discuss the topics that interested them; I joined mainly because they talked about it so much on Upgrade and Connected, and it seemed like a good place to find new people to chat with.

Turns out, I’ve made some of my best friends there. People I talk to every day, who know me better than I know some “in person” friends that I’ve known for years. But these friends have been a bad influence (on my wallet, at least).

There’s a channel in the Discord for each rough topic that the Relay FM shows cover. For example, there’s #tech, #apple, #creativity, #systems-and-themes etc. It makes sense, then, that there’s a #pens, given that there’s an entire show on Relay FM dedicated to them—The Pen Addict. I’ve listened to the show a couple of times, but it’s not one I’m subscribed to, and it never totally grabbed me. However, people sharing photos of their fountain pens, beautiful handwriting in stunning inks, letters they were writing and sending around the world—I wanted in.

I resisted for a while, I didn’t need another hobby to suck up what disposable income I had. So I started small—I asked for suggestions on a daily pen that could replace my cheap biros, nice to write with but nothing fancy. Madi suggested the Zebra Sarasa, and a three-pack dropped through the letterbox shortly afterwards. I was blown away! These were so much nicer to write with than what I’d been using before, and I was back to finding excuses to write by hand. I took to carrying one around in my pocket (a habit I’d never had before), along with a Field Notes pocket notebook that Madi had kindly sent across the ocean to me, in a package that also contained a whole host of different coloured refills. I was in.

One of the other members of the Discord, Ellen, had started up a small pen pals group, an offshoot from the official Relay Discord. I joined the group and wrote a couple of letters with the Sarasas, but really I wanted a fountain pen and everything that came with it - the little bottles of ink, the choice of nib size, the process of flushing, cleaning, and refilling, etc. So I asked for advice, took the plunge, and bought a TWSBI Eco Clear, and a bottle of TWSBI 1791 Orange ink. I mean, how else was I going to get to write in orange?!

It arrived (along with a packet of Love Hearts and the invoice held together with a little colourful smiley face paper clip, nice cute touches from Cult Pens) and I quickly filled it with the ink and started writing. Needless to say, I love it. I had chosen a medium nib, because I don’t like too skinny or too fat writing, and the only thing letting my letters down now is my handwriting!

Fast forward a few months, and I’m itching for a new colour. Don’t get me wrong, I love the orange, but I also fancied a nice vibrant pink. So what was I to do? How could I get the pink, without giving up having the orange easily to hand?

Clearly, the answer was to get a second fountain pen. (I see how this snowballs, now…) Ellen recommended another starter pen, the Lamy Safari, which I ordered in pink, with a broad nib this time. (It does need a converter to use bottled inks, as it usually takes a cartridge.) I also intended to add a bottle of Lamy Crystal ink in Rhodonite, which is a vibrant pink, but when the order arrived it turned out I’d actually somehow clicked on Agate, which is a rather flat grey. I was somewhat disappointed!

Contacting Cult Pens, they were happy for me to return the Agate and they would send out a replacement Rhodonite, which was very kind of them. I packaged the ink back up and took it off to the post office.

Ellen and another friend from the Discord, Alex, had been listening to me whine about not getting the pink, and a surprise package dropped through my letter box a day or so later. Opening it up, it contained a bottle of Robert Oster Signature ink in Hot Pink! Unbeknownst to me, they’d conspired to order me a replacement themselves, and chose Robert Oster in part because it’s good ink, but I suspect mostly because it’s Australian, and so is Ellen. They have a truly enormous range of colours, and the Hot Pink is fantastic. Exactly what I was after! It’s also in a 50ml bottle, which will last me literally forever. 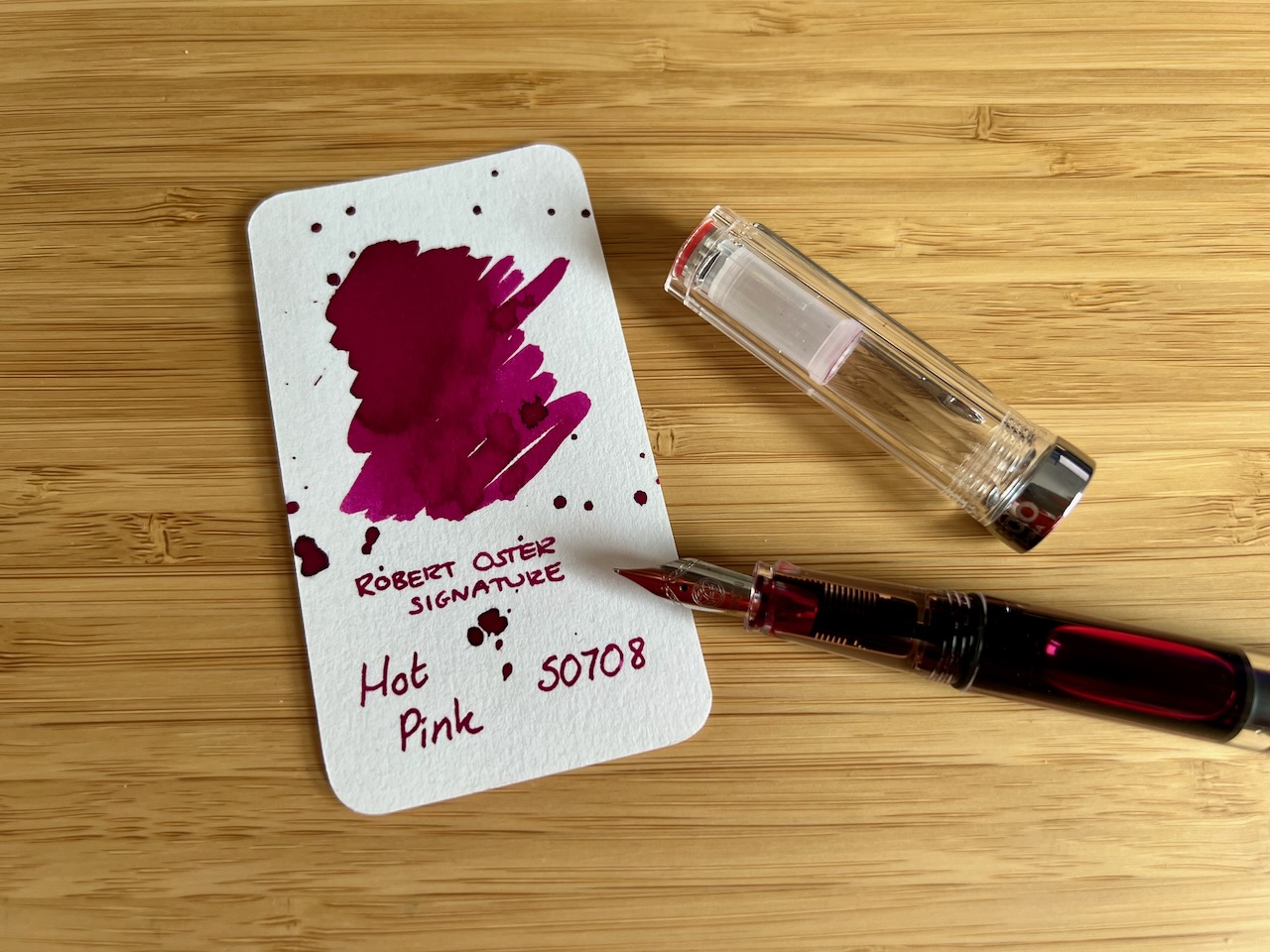 However, I was still going to be getting a replacement of the Lamy Crystal Rhodonite, so I contacted Cult Pens again and asked if they could instead send out a different colour (despite Ellen’s protestations that two pinks is not too many pinks, I want a nice range of colours before I start doubling up and comparing!)

They agreed, and so we come to today: I have a TWSBI Eco (M) inked in Robert Oster Signature Hot Pink, a Lamy Safari (B) with a tiny amount of Lamy Crystal Agate, and a bottle of Lamy Crystal Amazonite (a really lovely turquoise blue) on its way. I can’t wait to try that out. 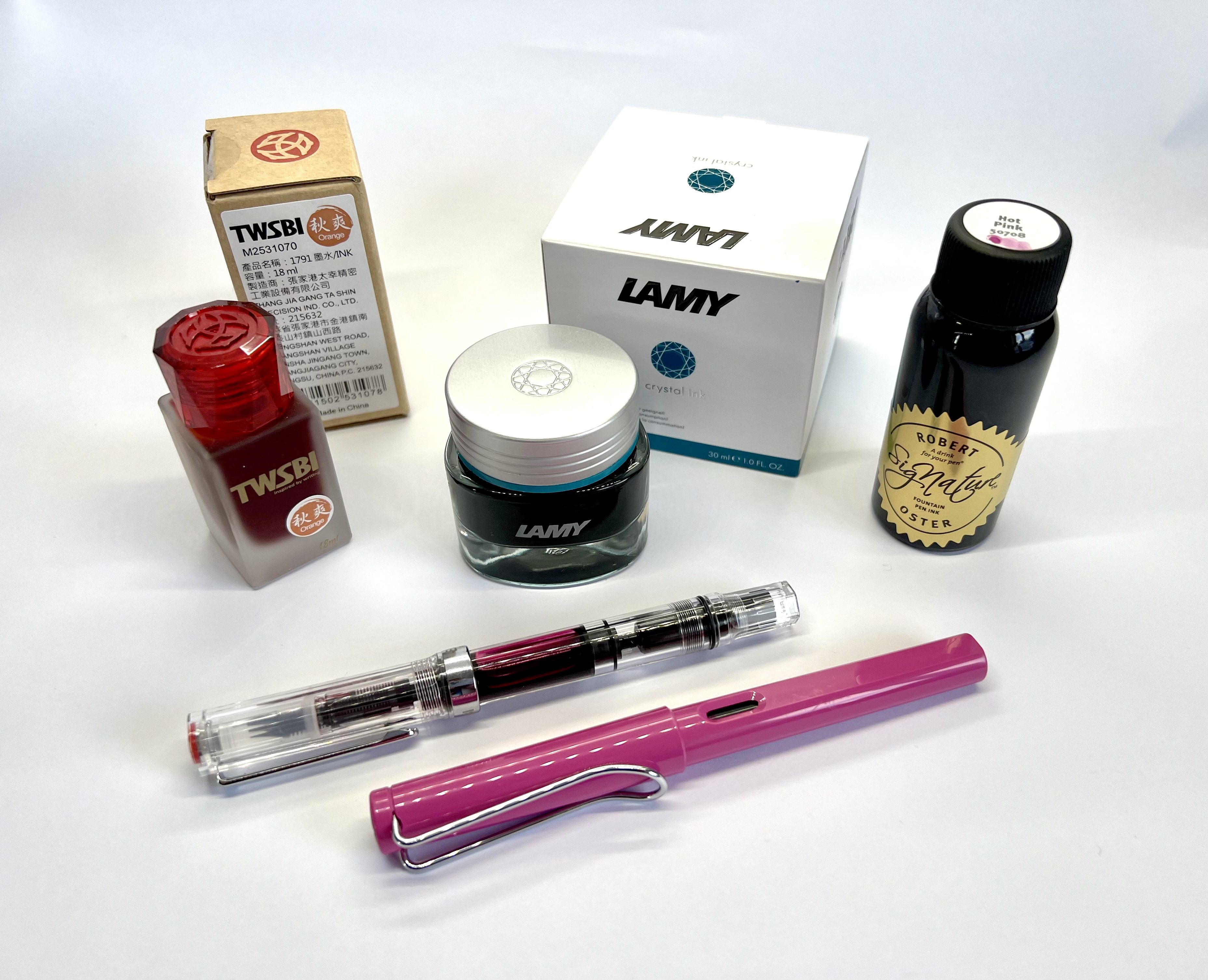 The only question is: now I have three ink bottles, and just the two pens. There’s only one solution, surely…